Written by Joe Public on January 7, 2022. Posted in Event Photos. 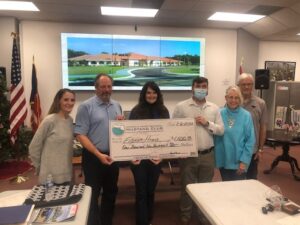 We were in the house with our Mustang owner friends last evening and received a (WOWZA) $1500 donation from the Emerald Coast Regional Mustang Club.

The club was created in 1987 by four local Mustang enthusiasts as an informal social group. The club has steadily grown over the years and was officially recognized and adopted as a regional group by the Mustang Club of America in 1995. All generations of Mustangs are represented in the club. Our members also cover several generations, yet share a common love for the Mustang car, it’s enjoyment, preservation, and history.

The Emerald Coast Regional Mustang Club actively supports several charity organizations in the local area; sponsor an annual car show each year and participate in other local charity events as a means to collect funds for these causes.  They also participate in the Fat Tuesday parade with us at Baytowne Village  each year, sharing a few mustangs for the crowds to enjoy.

Monthly meetings are held on the first Thursday of each month. Social hour starts at 6PM and the meeting begins at 7 PM.

Written by Joe Public on December 16, 2021. Posted in Event Photos. 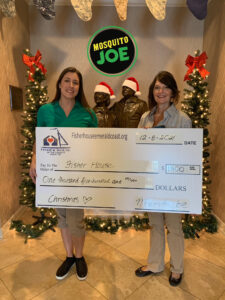 Mosquito Joe of Northwest Florida donates $20 for every person that pre-pays and mentions, “give 20.” By doing this they were able to donate $1500 to our Fisher House in 2021. Each year, they have been more successful and the donations have risen significantly.

Mosquito Joe of Northwest Florida specifically partners with the Fisher House of the Emerald Coast.  Need some help with Florida’s most popular mosquito named Joe?  Call our friends and give 20.

When Sara visited to make this presentation, she learned of the What’s for Dinner program and signed up to bring meals too!  What a blessing the Bess family is!

2021 Helping Heroes Together, nearing sell out – Thanks to Sponsors

Written by Joe Public on September 22, 2021. Posted in Articles.

“Thank you Fisher House for providing an invaluable service for those of us who need significant medical treatment.”

August 2021 Fisher House news from our home to yours

Check out the latest newsletter here.

“We are grateful to the Fisher House for hosting our family. We travelled from Austin, TX for my son and I to receive hyperbaric treatment from Dr. Zant and it was highly successful. The gracious staff and lovely house allowed our family to focus on healing. We also enjoyed visiting with other guests that we met during our stay. We will pray for healing for all of the families at the Fisher House.”

For the past few years, Altar’d State in Grand Boulevard, Miramar Beach has hosted a few Mission Mondays for our Fisher House donating a percentage of their sales from generous YOU  to our Eglin house.  We have been blessed with some big love from these days and this year takes the cake….they have cute clothes, great staff and wonderful all American culture.  They embrace giving back and do it in a big way.  Have I said BIG enough?  Check them out, https://www.altardstate.com/ 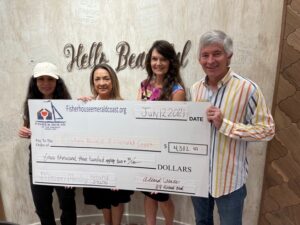 Most days my job is cool.  And there are days when it is WAY cool because we get to honor heroes in our community who are givers…..meet Sue Nelson.  Her spouse Randy, AKA Pup, and Sue are some of our very first “honorary commander” friends from their active duty days at the 728th back in 2003.  They have remained in our close village and last Thursday, we surprised Sue by honoring her, both for active duty, retiring as a Lt Col, but also for her most important work with the Preservation of the Force and Family at AFSOC.  (Loving our military families like we do, kindred spirits.)

Sue will retire at the end of this month and we conspired with her family and work friends to get her to this event under the auspices of Nana Duty…..HA!  She was surprised, and so deserving.  Here’s the write up from the evening…. 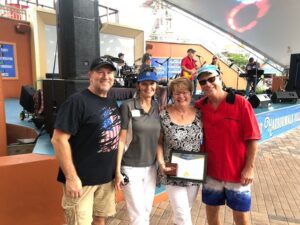 So I love this….this and these people, and all the people they represent. Lots of labor, lots of people buying tickets and enjoying the festival, and behind this picture are the doors leading into the home away from home comfort our families receive because of this……..

The single largest donation ever from our friends at the Village of Baytowne Wharf.  We are so grateful for Alan, Leighann, Troy and Kensey, AND Keith Brown, making his final tour as our VIP Volunteer Coordinator. 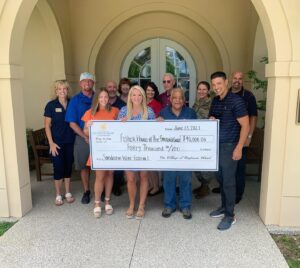