How awesome is the Commander of your host base? 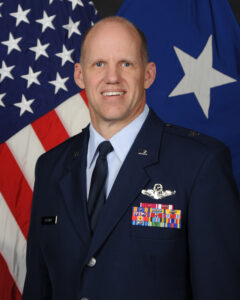 Military Education 101: What is a General Officer?

On Friday afternoon of last week, while attending an informal gathering on base to celebrate the command of 33FW Colonel Paul “Max” Moga and his lovely wife Amanda, I learned that a Fisher House guest has driven over to see the Commander of the 96th Test Wing earlier that day.  Yikes is your first thought……and WOW is your second one.  The guest was so impressed with the care he had received, he wanted to tell Brigadier General Dertien first hand.  Without an appointment and unannounced, he found his way to headquarters and was received warmly by staff, who apologetically shared that General Dertien had just returned from extensive travel and was not currently in the office.  Our guest said he wasn’t in a hurry and would wait.  He did wait for awhile, but decided to return to the house which is located across from the hospital.

Here’s the part that will make you over the top proud of our host, 96th Test Wing Commander Brigadier General Evan Dertien.  He had been on extended travel and his schedule is set many weeks and months in advance in coordination with many moving parts, offering little room for wiggle.  Add in  change of command season with everyone wanting/needing some of his time to preside over events and ceremonies, not to mention his own impending change of command early July with a hand off to someone else.

BUT……when he returned later to his office on Friday, he learned that a Fisher House guest visited him.  He could have felt comforted that his very capable staff received the gentleman warmly and their assurance to pass along the kind sentiment was indeed shared. BUT….when he returned later to his office on Friday, he decided to pay a visit himself.  He drove over to the Fisher House, at 350 Boatner Road, tapped on the door and asked to see the guest who had earlier visited him.  They chatted for awhile and the guest felt like he had received the most distinguished visitor, and he had, Brigadier General Dertien.  Our guest told the staff later he felt like Santa Claus himself had come in June.

The fact that this very busy person took precious time out of his very busy day to speak with someone, who can never repay him, speaks volumes about the kind of leadership the 96th Test Wing at Eglin has enjoyed for the past two years.  We are so lucky that our house sits on Eglin AFB and that Brigadier General Evan Dertien and his wife Erika have crossed our paths.  They both have been very involved with our mission, preparing meals, paving the way to receive our donation of furniture and now, impacting a guest in this way.  We wish them well as the embark on their next journey.  They have left a very high bar for the future and for Team Eglin engagement.

The guest also wrote this in the journal of his room at our Fisher House on Eglin.

“For about 9 weeks, we have thoroughly enjoyed this miracle known worldwide as “Fisher House.”  It’s an excellent place to heal and find new friends.  One cannot find a more capable and caring staff than Marc, Don, John and Judy.  We feel very blessed that all this came together after not being on an air force base for 54 years.”