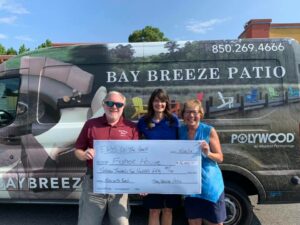 MIRAMAR BEACH — The sixth annual Eggs On the Beach cooking competition raised $40,000 for local nonprofit organizations, including its two nonprofit partners, Fisher House of the Emerald Coast and Food for Thought.
Held at Seascape Resort on Sept. 28, the family-friendly event welcomed more than 750 tasters and volunteers who sampled an array of delicacies cooked on Big Green Eggs by 25 cook teams.
Food for Thought and the Fisher House of the Emerald Coast each received a $16,250 donation from the 2019 EggFest.
“Our sixth annual event was a great success due to our amazing cook teams, volunteers and sponsors,” said Bay Breeze Patio co-owner and event founder Susan Kiley. “We feel proud to have created one of the best food festivals in the area. It is humbling to see the community come together to support these great causes.”
In the nonprofit category, South Walton Academy earned first place and a $3,500 donation. In second place, Sinfonia Gulf Coast earned a $2,500 donation toward its Youth Orchestra. The Rotary Club of Destin placed third and won a $1,500 donation.

Kevin Louthain, cooking for Westonwood Ranch’s Bacon Nation, tends to his grill during the 6th annual Eggs on the Beach Eggfest held at Seascape Resort Saturday.